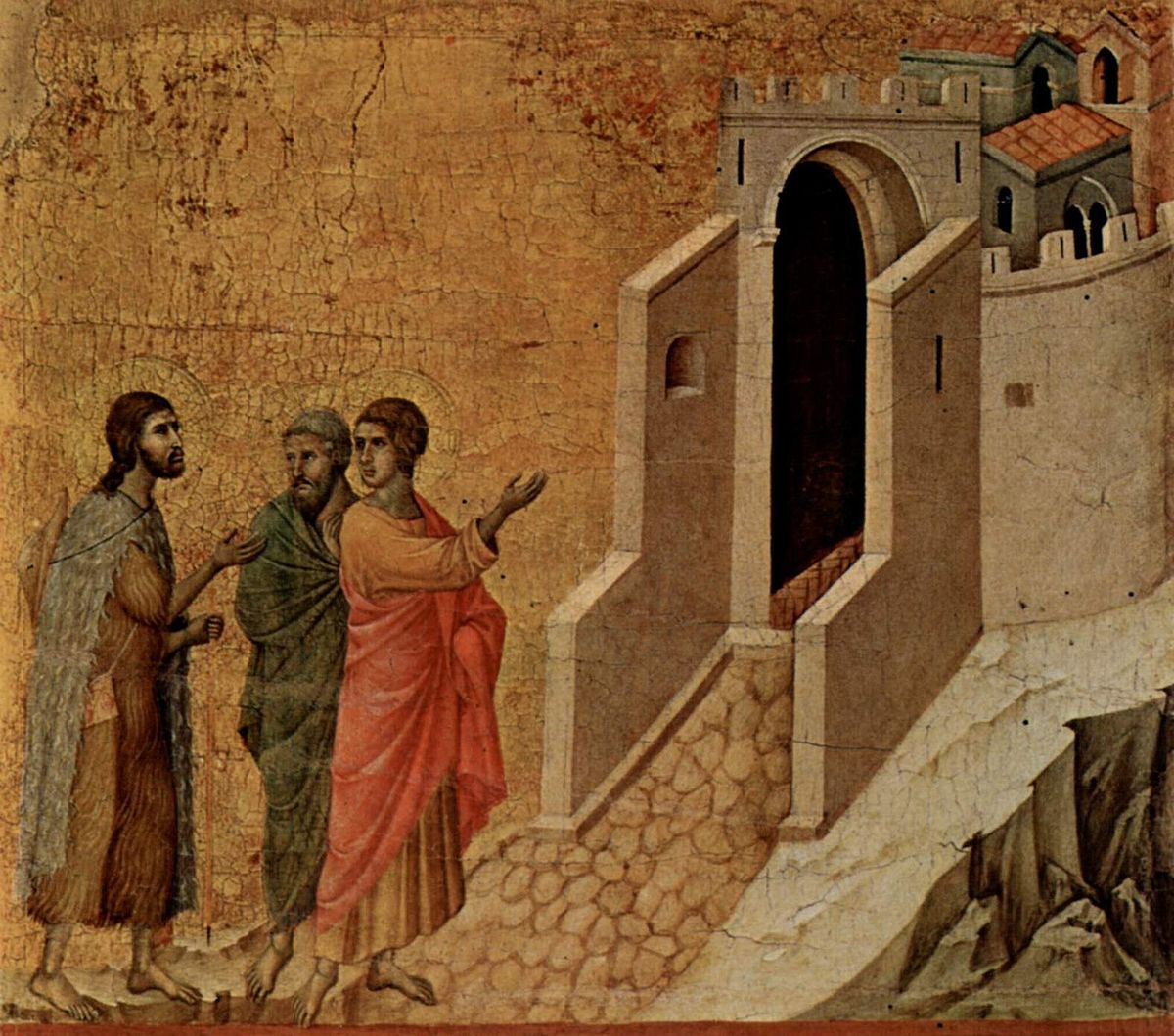 Now on that same day two of them were going to a village called Emmaus, about seven miles from Jerusalem, and talking with each other about all these things that had happened. While they were talking and discussing, Jesus himself came near and went with them, but their eyes were kept from recognizing him. And he said to them, ‘What are you discussing with each other while you walk along?’ They stood still, looking sad.

Then one of them, whose name was Cleopas, answered him, ‘Are you the only stranger in Jerusalem who does not know the things that have taken place there in these days?’ He asked them, ‘What things?’ They replied, ‘The things about Jesus of Nazareth, who was a prophet mighty in deed and word before God and all the people, and how our chief priests and leaders handed him over to be condemned to death and crucified him. But we had hoped that he was the one to redeem Israel. Yes, and besides all this, it is now the third day since these things took place. Moreover, some women of our group astounded us. They were at the tomb early this morning, and when they did not find his body there, they came back and told us that they had indeed seen a vision of angels who said that he was alive. Some of those who were with us went to the tomb and found it just as the women had said; but they did not see him.’

Then he said to them, ‘Oh, how foolish you are, and how slow of heart to believe all that the prophets have declared! Was it not necessary that the Messiah should suffer these things and then enter into his glory?’ Then beginning with Moses and all the prophets, he interpreted to them the things about himself in all the scriptures.

As they came near the village to which they were going, he walked ahead as if he were going on. But they urged him strongly, saying, ‘Stay with us, because it is almost evening and the day is now nearly over.’ So he went in to stay with them. When he was at the table with them, he took bread, blessed and broke it, and gave it to them.

Then their eyes were opened, and they recognised him; and he vanished from their sight. They said to each other, ‘Were not our hearts burning within us while he was talking to us on the road, while he was opening the scriptures to us?’ That same hour they got up and returned to Jerusalem; and they found the eleven and their companions gathered together.
They were saying, ‘The Lord has risen indeed, and he has appeared to Simon!’

Then they told what had happened on the road, and how he had been made known to them in the breaking of the bread. 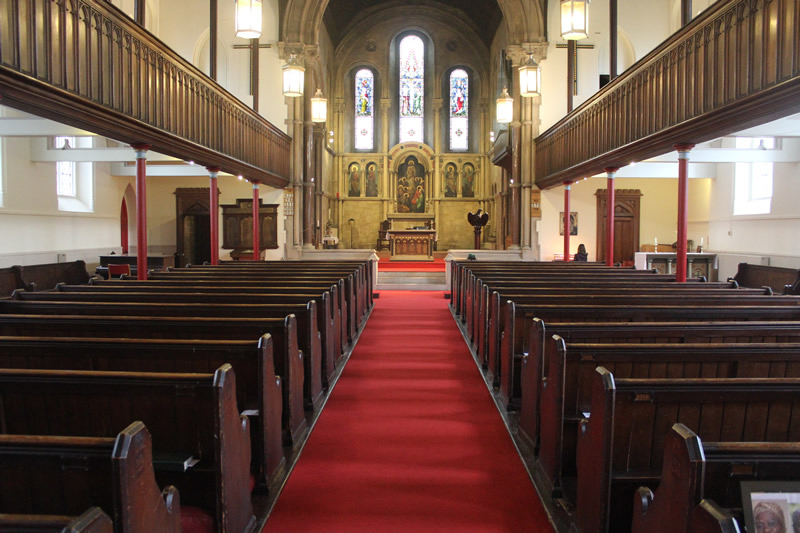 Though separated from one another we may still draw together as one in prayer. As we gather our prayers let us hold silence together, bring ourselves into each other’s presence in peace and hear each other’s voices in harmony.

Christ, we offer you our prayers for the leaders of your church. Shepherd them as they tend your flock here and now and bless them with good health and resilience.

O Lord, our governor, we offer you our supplications for the leaders of the secular world. Guide them to service for the common good and offer them grace and courage.

Healing Lord, we offer you our prayers for this broken world. We ask your balm and blessing for those who are called to heal and restore the ecology and body-mind-spirit of your creation.

Listening Spirit, we offer you our prayers without words.

Lord of infinite abundance, we offer you our thanksgivings. Open our hearts to the fullness of your creation within us and around us.

Spirit of truth, we offer our prayers for your wisdom and discernment. Help us to distinguish your voice of compassion, to hear your words of hope and offer ourselves in gratitude as servants of your grace.

Loving Creator, we offer you the prayers of our confusion and loss and also those of our joy and gratitude. In our vulnerability and humility we reveal our deepest humanity and our closest connection with your Son.

Resurrecting Lord, we offer our prayers for the departed, remembering all those who’ve died as your beloved children.

Rest eternal grant unto them, O Lord and may light perpetual shine upon them

Merciful Father, accept these prayers for the sake of your Son, our Saviour, Jesus Christ.

Father hear the prayer we offer

for ease that prayer shall be,
but for strength that we may ever
live our lives courageously.

Not for ever in green pastures
do we ask our way to be;
but the steep and rugged pathway
may we tread rejoicingly.

Not for ever by still waters
would we idly rest and stay;
but would smite the living fountains
from the rocks along our way.

Be our strength in hours of weakness,
in our wanderings be our guide;
through endeavour, failure, danger,
Father, be thou at our side.

Let nothing disturb you,

nothing frighten you,
All things are passing.
God never changes.
Patience obtains all things.
Whoever has God lacks nothing.
God is enough.

endless is the vict’ry thou o’er death hast won;
angels in bright raiment rolled the stone away,
kept the folded grave-clothes where thy body lay.

Lo! Jesus meets us, risen from the tomb;
lovingly he greets us, scatters fear and gloom;
let the church with gladness, hymns of triumph sing,
for her Lord now liveth, death hath lost its sting. [Refrain]

No more we doubt thee, glorious Prince of life;
life is naught without thee: aid us in our strife;
make us more than conqu’rors, thro’ thy deathless love:
bring us safe thro’ Jordan to thy home above. [Refrain]

The Road to Emmaus, from Julia

Emmaus was an ancient town about 7 miles northwest of Jerusalem. The Hebrew name for the place meant warm spring. One of the oldest versions of the Gospel of Luke reads Oulammaus instead of Emmaus. In the Greek translation of the Old Testament scriptures, Oulammaus was the place where Jacob was visited by God in his dream, while sleeping on a rock. But Oulammaus was not a real place name at all. It was created by a mistake in translation. The original name in Hebrew was Luz. This mistake was still there at the time when the Gospel was written around 100 AD. Some bible scholars say that the story in Luke’s Gospel was merely symbolic, wanting to draw a parallel between Jacob being visited by God and the disciples being visited by Jesus.

In Luke’s telling of the story we are told that on the same day two of them were on the road to Emmaus. One of them is named Cleopas. He may have been a brother of Joseph, Jesus’ uncle. It is strange that the other is not named. Perhaps the writer intended the listener to place themselves in the role of the unnamed disciple. As we dig deeper into the story of the companions of Jesus on the road to Emmaus, notice how you it draws you in.

I wonder if they were intending to reach Emmaus. It is unlikely that the close companions of Jesus would have been walking anywhere in the days following his execution. We hear elsewhere in the gospels how the disciples were huddled together behind closed doors for fear of being hunted down as collaborators. Perhaps these two, not so well-known, were able to move freely and just needed somewhere to walk– it could have been in any direction.

As they walked, they struggled to piece together the events of the past three days. None of it made any sense. Jesus, the great and mighty prophet, who they had hoped would bring Israel back to God, had been handed over by their own chief priests and leaders to the Roman authorities to be condemned to death and crucified. And now his body was gone from the tomb.

The disciples struggle to make sense of the events of the past days. And as they question their faith together, Jesus came alongside them and opened the scriptures for them. It is only when we struggle to make sense of scripture and the events of our lives that the risen Jesus breaks through. Every time each of us shares with another something of our questioning, our deepest concerns about life and faith, Jesus is present, if we pay attention, even, as it was for the disciples on the road, our eyes are kept from seeing him.

On the road to Emmaus the travellers were not conscious that this journey was calling them to a new reality. In our living we often miss the hints of possibilities that are around us.  We close ourselves off from new understandings. We are not always attuned to these hints.  We are busy, overwhelmed by the events of our life, the stresses of our reality.  It is hard to hear the hints for wholeness.

The familiar ways of affirming faith do not work for the companions on the road. So they keep moving until the evening is almost on them. They stop, and they invite the stranger to stay with them and share food. It is in the welcome of the stranger that they begin to leave behind their loss and fear.  And then, in the breaking of bread, and the sharing of the table their eyes are opened.

On the road to Emmaus the stranger asked the travellers to let go of the past.  They cannot hold on to the Jesus they knew.  Notice that as soon as they recognize him, he vanishes from their sight. It is in the nature of mystical experiences to come and go.  Moments of assurance are fleeting. Inspiration is transitory. Health is temporary. But God is in each detail, filling it with holiness and then moving on and inviting us to follow.

In our stories of Easter we see things transformed by movement. God’s Easter Spirit is found most significantly in process, rather than stability. To experience God’s inspiration more fully, we have to be on the move, because God is on the move!

O God whose greeting we miss

And whose departure we delay,

Make our hearts burn with insight

On our ordinary road;

That, as we grasp you in the broken bread

We may also let you go,

And return to speak your word of life

In the name of Christ.